Several actresses who were the best of the best in this genre such as Deanna Durbin, Irene Dunne, Claudette Colbert, and Jean Arthur made their mark in the 1930s and continued to shine into the 1940s. 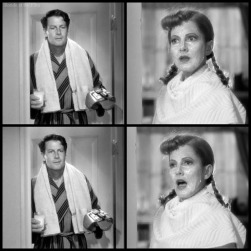 The More the Merrier (1943)~ In this movie Jean Arthur is living in Washington DC during a housing crisis.  When she rents the extra room to an older man, he in turn rents half of his room to a young and very attractive Joel McCrea.  Jean and Joel are attracted to each other however she is engaged, and he is about to leave the country on a secret mission for a couple of years.